OK, I'm back, and I'm about to write about evil, art, and game design. To make it all go down easier, there will also be ponies. So read, on but remember ... 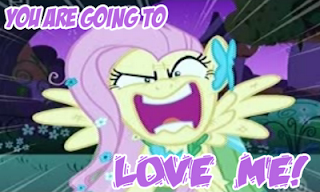 GameBanshee writer Eric Schwarz wrote a tough but fair review of our recent game, Avernum: Escape From the Pit. In the review, he made a comment about the game's story that I thought was really interesting:

"The game world's overall tone and morality is also a bit strange - slaughtering Slith (lizardmen) farmers in the name of the king might be uncomfortable, but the game world certainly doesn't care."


I actually liked this comment a lot, but he didn’t go near as far as he could have. There are places in Avernum where the morality gets even stranger.

For example, one of the main foes in the game is an army of savage lizard men, called slithzerikai, sliths for short. (The sliths are not all hostile. They have friendly settlements, and playing as a slith is an option in later games in the series.)

In one of the dungeons, you have the option to smash a huge clutch of slith eggs. If you do so, several of their guards attack you, but that is the only negative consequence for what most would consider a pretty evil act. I have been accused in my forums of encouraging baby-killing in my games. And, yes, I did allow the player to do a pretty horrible thing with no punishment. And I have written games in which the player can choose to do things that are even worse.

Why did I do this?

Because computer games are art.

Yeah, I know. The debate about whether video games are art is probably the boringest thing in the history of boring things. To liven this blog post up, here are more ponies. Hey ponies, what do you think of tedious navel-gazing blog posts? 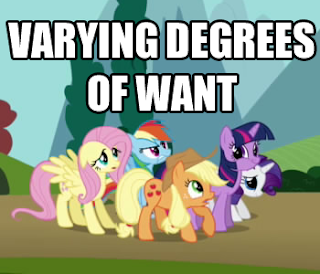 Products Of My Own Weird Brain

Avernum: Escape From the Pit is a rewrite of Exile: Escape From the Pit, the very first game I released as shareware. It was the first Real Game (tm) I ever tried to write, and it was a pretty wild, uncontrolled process. Since I'd never done it before, I just went crazy, throwing encounters and plot bits and moral dilemmas in willy-nilly. It was a raw, unguarded process. I didn't second-guess anything. I just took how I thought and how I saw the world and put it down in the computer.

This is how storytelling works.

I've always been a huge news junkie. I still keep a close eye on what is happening in the world, as it fascinates me. (And is an endless source of fresh material.) Doing so, however, has given me a very cynical worldview. Our world has many, many principled people, struggling against enormous odds to increase the reserve of justice and kindness available on the planet.

However, these generally unsung heroes fight against an overwhelming amount of awfulness. Ours is a world where horrible things happen to undeserving people on a constant basis, and nobody who is not personally involved will ever know or care.

This is how I see the world. It's not right or wrong. It's just how I see things. When I write a story, any story, it will be colored, in ways obvious and subtle, by this perception.

This is why the morality in Avernum (and in all of my games, really) seems a bit "strange." Because it reflects my worldview, and being exposed to how another humans sees the world can be weird and unsettling. This is what makes art cool. It lets you see how other people think.

My games reflect how I feel the world IS, NOT how I feel the world SHOULD BE. I do not personally endorse crushing the weak, hunting goblins for sport, or smashing slithzerikai eggs. Extrapolating an artist's personal experience and views from his or her work is very rarely accurate and is generally a waste of time.

Hmm. I'm getting Bored. So here is this. 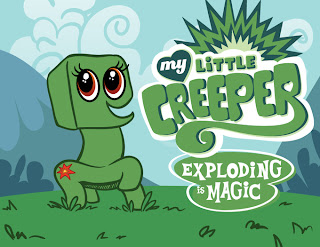 So Why Leave Do I Leave the Horrible Bits In?

Because I write role-playing games.

The term "role-playing" has become hugely debased since it was created. Most RPGs don't give you the opportunity to actually decide what sort of person you want to play, even in the simplistic way computer games allow. That is why I always try to put moral choices in my games: to give the player more agency in what is going on and to help him or her feel more attached to the little computer person they control. And the better and more dramatic the choices you allow, the greater the effect.

But I have to play fair. If someone is evil, I can only punish them if it makes sense. Sometimes, evil is not punished. Thus, I don't always punish it. Sometimes, but not always.

There's No Right or Wrong Ways To Design These Things

I wanted to pull out and discuss that review quote because it was, in the end, a perfectly subjective artistic judgment. There's nothing wrong with that, of course. Reviews are nothing but subjective judgments. That is what makes reviews cool. My game made Eric Schwarz feel a little unsettled. That wasn't a right or wrong reaction. It was just his honest reaction, and I'm happy to get any reaction at all. I'd rather make someone feel something, even if it's not positive, than for my game to generate 30 hours of "Meh."

As computer games develop as an art form, I look forward to more discussion about what they mean and how they affect us. (Though, of course, I may be the only one.) People are more interesting than polygons.

Thank you for your patience. I hope it went well. How did it go, Spike? 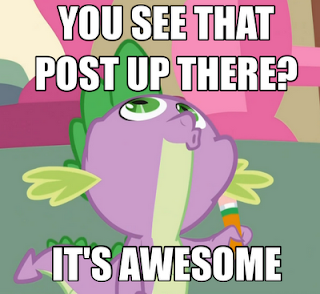 Email ThisBlogThis!Share to TwitterShare to FacebookShare to Pinterest
Labels: design, i act like i am smart, ponies