Three Rules For Difficulty In RPGs 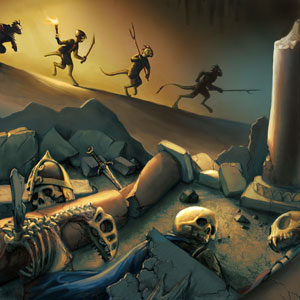 As I put the final touches on Avadon: The Black Fortress, I am finally wrapping up the most touchy, painful, contentious part of the game: play balance. Should it be harder or easier? Is this particular fight fair? How many players will wash out halfway through the game and be forever angry at me for my suckitude?

The fans of role-playing games are a pretty diverse bunch. Some prefer stories. Some fixate on stat-building. Some want to beat everything easily, and others are irritated if there are no challenges. It's a pretty amorphous blob of interests, and nobody can satisfy them all. I just try to appeal to as much of the blob as possible.

Over the years, I have made three observations regarding game difficulty. These are the ideas I always come back to as I decide how tough a given section or encounter will be. I think these guidelines are, to the extent anything can be in a creative endeavor, The Truth.

In other words, first, there are fights that will almost never ever kill a player, also known as trash, or trash mobs. If your trash mobs are frequently killing the character, your balance is messed up. (Early versions of Avernum 6 had a big problem with this.) Most of the time, the vast majority of the fights in a game will be this sort.

Then there are fights that the player can possibly lose (mini bosses, bosses). And, of course, for fights that can kill the player, there is a spectrum of how likely that end result is. Some bosses will only kill you if you really aren't paying attention. Others require actual skill and strategy, and maybe a few tries to get your tactics down.

Observation Two: In an RPG, you have to have some of both sorts of fight.

RPG fans expect a lot of trash to slaughter, so they can be a badass and Conan-like and so they can collect experience to get strong and get new spells and swords and stuff.

The trickier part is understanding the need for tough fights. Very often, players don't like to be seriously challenged. They hate to lose. They hate to lose repeatedly. Sometimes, the temptation to just give up and have every fight on the default difficulty be easy peasy is overwhelming.

But you still need to have tough fights, for several reasons. A game full of only easy fights against trash is monotonous and dull. The suspension of disbelief in a role-playing game is delicate, and, if a dragon is only as tough as Goblin #0145, it just feels wrong. And because the adrenaline rush of achieving something difficult (be it slaying a demon lord of winning a game of solitaire) is one of the great pleasures of computer games, and you just can't lose that.

So, you might ask, why don't I just put in tough fights and really carefully balance them so that everyone can beat them in just a few tries? That brings us to the third observation, which is both subtle and vitally important.

Observation Three: If a fight has any chance of beating the player, there is a percentage of users who will NEVER be able to beat it.

It took me a long, long time to realize this. Too long. But it is vitally important to understand the difficulty of doing game balance.

(By the way, along these lines, if you put any puzzle or riddle in a game, there is a percentage of users who will never figure it out. This is why I've drastically reduced the number of puzzles in my games. Arguably, I have reduced it too much. It bears thinking about. However, this is my rationale for doing it.)

When someone loses to a fight more than three or four times, they will almost always be angry, and they will always blame you. Some of them will temporarily lower the difficulty, get past the fight, and move on. Some will gut it out and prevail. And some will ragequit and you will never sell a game to them again.

I try to appeal to a wide group of customers, but there is one customer I can never appeal to: The gamer who can't beat a fight and refuses to lower the difficulty. I get e-mails from this person all the time, expressions of hurt and betrayal and rage, accompanied with the promise that they will never buy another one of my games. A promise I believe, by the way. I hate getting these e-mails. Everyone does. It's like a punch in the stomach. But I suck it up, send a nice message back, and move on. It's like death and taxes. It's part of the biz.

But, with every difficult encounter, I eventually have to plant my flag and say, "You must be at least this badass to go on this ride." If you aren't sure why I do this, please consult with the reasons accompanying Observation Two.

Of Course, These Aren't Universal Laws

I expect that the standard swarms of hair-trigger internet nitpickers haven't read this far. They went to the Comments to excoriate me based on some minor point about Observations One or Two, or they want me to explain how Shadow of the Colossus can be a good game with only boss fights. (Answer: Not an RPG.)

But role-playing games are a genre. Genres have conventions. That's what makes them Genres! I can go along with the conventions or fight against them, but, either way, they are part of the DNA of the games I make.

Role-playing games need trash and they need bosses. Put both in, and never lose sight of what makes trash trash and what makes bosses bosses.
Posted by Jeff Vogel at 11:12 AM 108 comments:

The gaming site GameBanshee was kind enough to call our newest game, Avernum 6, in their annual awards. We were runner-ups in the Independent RPG of the Year and RPG Game of the Year categories. Thank you very much!

This sort of thing is exciting to me, and not just because of the obvious self-esteem and greed motivations. The recession has been really rough on the gaming press, and, because of that, it's been rough on us. Many of the writers and editors who liked to cover us lost their jobs, and many of the small news outlets that were willing to cover humble Indie games like ours disappeared or were absorbed. It's been depressing.

The hardest part about being a small Indie is getting attention. Press coverage is oxygen. It takes the tenacity of the cockroach to eventually find editors who are willing to say, "Sure, they're small, but I believe in what they're doing. I'm going to back them up." And, when it happens (such as the recent coverage of us in PC Gamer), I'm incredibly grateful.
Posted by Jeff Vogel at 11:51 AM 42 comments: