Watch Me Talk About Something!

Casual Connect is an annual convention in Seattle dedicated to the discussion of casual computer games, the design and marketing of same, and how to write games that milk every last penny from your aunt by getting her to bug you on Facebook for cow clicks or Smurfberries or whatever.

Anyway, they were kind enough to ask me to speak about storytelling in computer games for their Indie track. I gave my talk, and they filmed it. My talk is online here. Please enjoy my sultry voice, questionable game design principles, and unique posture.

Or not. The talk is 20 minutes long. You could probably more profitably spend your time doing, say, ANYTHING ELSE.

(Technical note: My slides are a .pdf. I know. I suck and am unclassy. But my main life goal is to reach death without ever learning how to use Powerpoint, and I'm sticking with it.)

The most interesting thing about Casual Connect? How weird anyone who sells software in the old school way is made to feel. Here's what I do: I write a game. I give it to you in return for a set number of dollars. Then we part ways, and you never have to look at my pale, beardy face again.

This model is so incredibly retro now! Pay money for a game? Nonsense! Everyone real makes their money with microtransactions and advertising and nickle and diming you for packs of 100 Dragon Bux you can use to make your zombie ninja pirate dragon grow faster. And if you make money any other way, people in suits will act very nervous and not make eye contact with you anymore.

If you end up at Casual Connect and talking to actual grown-up business people, I suggest you do what I did: Have a firm, manly handshake. Make eye contact. Say "monetize" and "ARPU" as much as possible. And then pee yourself.

Email ThisBlogThis!Share to TwitterShare to FacebookShare to Pinterest
Labels: design, i act like i am smart, i am very old, shameless self-promotion, stories are for losers and squares 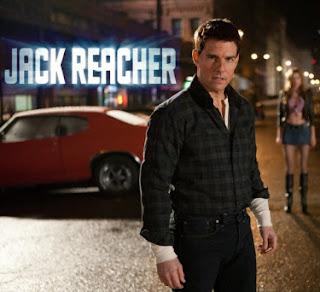 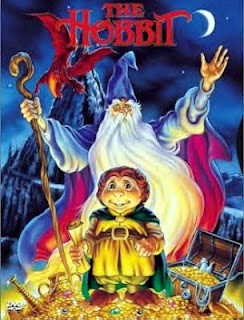 There was one more thing I wanted to say about Mass Effect (to accompany my earlier articles on the title). After heavy play of the second and third games in the series, I want to propose a rule to all game designers from now until forever ...

It is OK to make the player's character look ugly and twisted, as long as it is in a cute, cartoonish way. It is not OK to make the main character actively horrifying and painful to look at.

I think this is a reasonable rule of thumb. If you're going to expect someone to spend 40 hours in your fantasy world, you don't want them going "GAHHHH!!!" every time they look at the screen.

Why do I bring it up?

Well, in Mass Effect, the main spectrum for your character's moral choices is between Paragon (nice, lawful good, goody-two-shoes) and Renegade (harsh, Bad Cop, Patton-type). Note that this is not Good vs. Evil! You're always good. It's just whether you are nice-good or cranky-good.

But there is a key difference between the two paths. If you are a Paragon, you stick with the nice, normal face you made in character creation. However, if you choose the Renegade dialogue options, your face will look like this ... 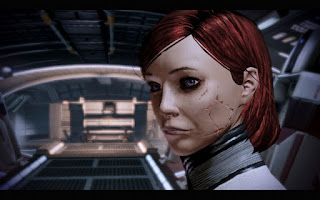 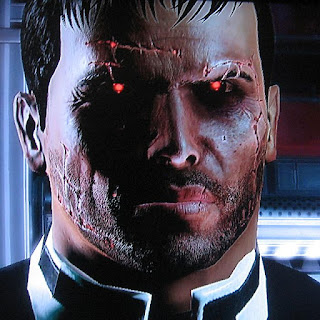 That's right. When playing Mass Effect, you better be as polite to as many people as you can, if you don't want to look like a hideous mutant leperzombie whose face is peeling off in glowing sheets.

(Note that, in both Mass Effect 2 and 3, you can spend resources to remove the leperface effect. While BioWare likes to pretend it treats both moral choices equally, this sort of gives the game away. They are actively punishing you for being rude. If you doubt this, remember: A Paragon player can't spend resources to get the zombie look. It only works the other way 'round.)

Mass Effect is known for its in-game romances. Halfway through Mass Effect 3, for example, your hot, easy secretary comes to your quarters to use your shower and totally tries to bang you. (Warning: The previous sentence contained a spoiler!) Bioware, please please please, in future games make it so I don't feel sorry for anyone trying to sleep with my character. When she makes her move, I, as a player, don't want be saying:

"What are you DOING? Haven't you looked at me? Haven't you seen my FACE? Sure, I have a working shower! Now run! RUN! I'M A MONSTERRRRR!"

Look. These things are basically adolescent wish fulfillment. I don't need to have a really gross face in my fantasy world. I've had enough of that in my actual physical adolescent life, thanks.