Legend of Grimrock and Design Space 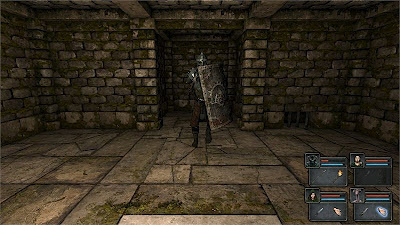 There's been a lot of action in the little world of indie role-playing games. Dungeons of Dredmor. Zeboyd Games announcing the next Penny Arcade title. Hack, Slash, Loot. Torchlight 2 coming.  And, of course, two modest titles from my company.

Which makes sense. With few exceptions, major developers have left the genre behind. And whenever a beloved genre gets left behind by AAA titles, that is a great opportunity for small developers to duck in and eat all of those tasty, tasty scraps.

Which brings me to Legend of Grimrock, from Finnish developer Almost Human. This surprise hit came out on Steam about three weeks ago and proceeded to make the large moneys.

I played Legend of Grimrock from front to back. It's a pure nostalgia trip, extremely well done, and I enjoyed it immensely. If you like role-playing games of the retro school, I recommend it.

So there. That's the review portion out of the away, complete with a nice pull quote. Phew.

But what I find very interesting about the title is where it comes from, and how I suspect that its design doesn't have many more places to go from here.

Legend of Grimrock is a very faithful tribute to the 1987 classic dungeon crawler Dungeon Master. It has a first person view, takes place on a square graph paper grid (you can only move north, south, east, and west), and has lots of physics and timing puzzles involving teleporters and pressure plates on the floor.

In Grimrock, as in its inspiration, you can still only attack foes directly north, south, east, or west of you. This creates the peculiar situation where an enemy one space diagonal from you cannot affect you in any way. In Dungeon Master, you could exploit this to defeat even the strongest foes with ease. Grimrock has used a variety of tricks (like having foes turn left and right rapidly to try to outflank you) to mitigate this problem, and, by and large, combat is fast-paced and fun. It's a little surreal, but it plays.

Anyway. It was a huge hit and a lot of fun back in the day, and things that are fun don't stop being fun just because time moves on. There were four Dungeon Master games, the last coming out in 1993. The same basic design was used for three Eye of the Beholder Dungeons and Dragons games from SSI. The last of which also came out in 1993.

And then, that's it. That style of game, which was so much fun and made so much money, disappeared from the face of the earth for twenty years until the Almost Human team picked it up, dusted it off, and turned it into gold.

I suspect that it will be used a bit more. Maybe Grimrock 2, or a similar tribute from another developer. At which point, I predict that the design will disappear again.

Why? Because of a really cool and nerdy game design concept: Design Space.

So suppose you make a role-playing game. There are basically two steps. First, you make the engine. That is, the graphics, the game system, the character classes and spells, the stuff you can place in the world (walls, doors, traps, things that spit fire out of the walls, arrows and knees, etc.). Second, you take this toolkit you made and you design a world in it. You take the elements of the design and piece them together into a game.

When you have finished this first step, then you can look at all of the possible neat things you can do with them when making the material the player will actually experience. This finite list of possibilities is the design space.

Some engines have really big design spaces. There is still a lot of new adventures you could write in the world of Skyrim. They made a lot of games with the Infinity Engine. Some engines, on the other hand, have a small design space. There isn't a lot you can do with them without starting to repeat yourself. The original Penny Arcade games had this problem. The first one did OK and the second one flopped. I think a large part of the reason is that, once you'd played the first game, you had seen everything the engine had to offer.

This Is Why I Rewrite My Own Game Engines Every Few Years ...

... as much as my fans hate when I do it. I wrote a five game series called Geneforge. Five games. By the time the fifth one was done, I think I'd done just about everything with that game engine and system that I could. All the juice was squeezed out of it. I had to write a new thing just so I could have fresh ideas again.

Once again, Legend of Grimrock is a ton of fun, and I enjoyed it immensely. However, it is a game on a square grid with monsters, pressure plates, secret door switches, and holes in the wall that shoot stuff out. There is only a limited number of ways that you can piece those elements together to make interesting dungeons for the player to explore. It's finite, and, by the time I was at the bottom of the dungeon, I was already noticing elements repeating themselves.

As I said, there might be a Grimrock 2. But, as we discovered twenty years ago, this earth will only stay fertile for so long before it needs to lie fallow again. Only then will it yield a fresh crop for a new generation of gamers. (Analogy!!!)

This is NOT a criticism of Legend of Grimrock, which is, for the third time, very good. This game doesn't have to be responsible for carrying future titles. It only has to be fun by itself, and it does so very well.

I just think it's a good example of the varying durability of different designs. Some can support many titles. Some only a few. This isn't a problem. It is simply important, when planning games beyond the first, not to heap onto a humble structure too many expectations.

The Grimrock devs plan to port the game to iOS. This game frequently requires a lot of very fast, precise movements to finish puzzles or to just survive. Controlling this sort of game on a touchpad is almost always neither fast nor precise. I will be very, very interested to see how they tackle this problem. I suspect encounter by encounter rebalancing will be necessary, which will suck for them, but I hope they prove me wrong.

If any other indie developers are looking for an old design to pick up, dust off, and have great success, Ultima Underworld is just sitting there. This was the next step in the design progression started by Dungeon Master. It still takes place in one huge dungeon, but, instead of taking place on a grid, it is fully 3-D with 360 degree movement.

Huge hit. Ton of fun. Someone! Rip it off! Fast!