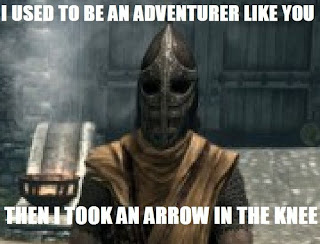 It's their crazy version of something like reality, and you have to meet it halfway (because there really are a lot of glitches). Elder Scrolls fans accept this, and, in return, they get a computer game experience that's truly unique.
Posted by Jeff Vogel at 1:03 PM 205 comments:

Avernum: Escape From the Pit Is Out

We have released our newest game, Avernum: Escape From the Pit, for the Macintosh. As I have written before, it is a ground-up rewrite of one of our earlier games that desperately needed it. We've tried to put a lot of cool new graphics, design, and polish into it. A big demo is available, and the Windows and iPad versions should be out in April.

This is a rewrite of the first game I ever wrote for money, Exile: Escape From the Pit, which first came out in January of 1995. It has been fascinating to go back to my first full-length design. I'd forgotten how weird and silly my work could get.

Skyrim has provided a fresh reminder of how much people love a huge, sprawling world full of details, cul-de-sacs, and side quests to get lost in. When I started out, I made games like that. Avernum is really, really big. It's possible to wander out into the wilds, get lost, and be eternally distracted by all the stuff you can do and dungeons you can explore. I was heavily inspired by the early Might and Magic games, some of the first games that really tried to overwhelm you with a huge world.

I love games like this. However, writing them is difficult for the obvious reason: A huge world takes a lot of work and a lot of energy. I'm old now, and I don't have the limitless drive I used to. I tend now to write smaller, more focused games. Less terrain to explore, but with a more intricate story.

I am constantly accused of never innovating, and this vexes me. I have worked hard to try new things in my RPGs and stretch the genre, and I've been doing this from day one.

Example: Avernum doesn't have one storyline. It has three. The game has three long, arcing, game-winning quests, each of them almost entirely separate from each other. It is possible to achieve one of them, say escaping the underworld, be told you have won, pat yourself on the back, and never realize that the game still has two epic storylines remaining.

I did two games this way, and I've never seen another RPG that does the same thing. I eventually let it go to focus on more detailed single stories, but I still think it was a really cool idea.

In my spare time, I have had some success as a writer of humor. My games have always had funny elements, some more than others. Avernum contains some bits that are so weird and off the wall that I could never see myself doing now. I don't want to give precise examples, but if you play the game for more than a little you'll start to see what I mean.

Years Pass. Nothing You Can Do About it.

Since 1995, my work has gotten a lot tighter, more controlled, and generally less eccentric. This has been both good and bad. It's also unavoidable. I'm older and more experienced now, and that sort of fresh, unfocused enthusiasm is just not available to me anymore. I still write good games (or, at least, games that sell), but my changing tastes and increasing age have made me unable to do some things and more able to do certain new things.

For example, if you tried Avadon: The Black Fortress and didn't like it, I'm sorry. That is the sort of game I write now. This will change. Five years from now, I'll do something entirely different. (I really, really want to return to open-ended non-linear games at least once before I retire.) But for now, that's it. If you hate my new games, then there is nothing I can do about that.

But, if you don't like the new stuff, I suggest trying Avernum. It's old-school, and it's really neat. I hope you like it.

(And I'll post a link to this article in April when the versions for the other platforms come out.)
Posted by Jeff Vogel at 1:05 PM 555 comments:

My Two Gaming Pet Peeves For the Day

Our newest game, Avernum: Escape From the Pit, has reached Release Candidate status. This means that we've made a version that seems complete and ready to sell, and we are touching it as little as possible while beta testers spend one more week trying to break it.

This means that I have a very, very important job: Doing nothing. Don't touch the app. Hands off. Anything I change has a chance of breaking something. So I'm spending this week catching up on my game-playing.

(I also made a really spiffy trailer for Avernum. Turns out, there's this site called YouTube. Who knew?)

This has given me a precious chance to find new pet peeves to complain about. And isn't that what blogs are for?

Of course, like everyone else in the world, our house has Skyrim-fever. As you may have heard, it's a good game.

But, like all RPGs Bethesda makes, you spend sooooo much time sorting through items. Looting the dungeons takes ten times longer than killing the monsters within. And you can only carry so many pounds of treasure. So every item you find requires tiresome "Is this hide shield worth enough money to justify the weight. OK. It weighs eight pounds and is worth 20 coins, or 2.5 coins per pound, so that is an efficient piece of treasure to pick up and ... AHHHH. MY BRAINS!!!!!" And then you pick up one suit of armor too many and you have to drop two pounds of stuff so you go through your pack to find something top drop and ...

Does anyone ever find this fun?

This is one of those things that gets hardcore gamerz mad at me, but screw realism. In my newest games, I give the player a Junk Bag. You can put infinite items in it, their weight isn't counted, and, when you reach a store, you can push a button to sell everything in it.

This is great for people who find even the awesome Dog Takes Your Stuff Back To Town To Sell It system in Torchlight too taxing.

It's the opposite of realism, and I really don't care. When I design a game, the first thing I do is decide what I want the player to spend most of his/her time doing. Hopefully, that part is where the fun is. The second thing I do is minimize time spent doing absolutely everything else.

If I can keep even one player from spending a hour picking through his or her backpack and trying to shed those three extra pounds, I have done my good work as a citizen of the Earth.

I Did Those Jumps In 61 Seconds Instead Of 59, So I Should Totally Be Punished.

In any game with a lot of jumping on platforms, it seems like a legal requirement that there has to be at least one room with a timed sequence. You're at the bottom of some shaft with sheer walls and a tunnel at the top. You push a button. Ledges slide out of the walls. And then you hear that accursed, stress-inducing ticking that lets you know that you have to get to the top quickly, or not at all.

Is there anyone, anywhere, who pushes that button, hears the telltale ticking sound, and thinks, "This is so AWESOME!"

This isn't fun. Here is why. Gaining a heroic skill (Fighting. Leaping.) is fun. Using that skill is fun. Perfecting a skill is far less fun. Repeating a series of jumps until you can do them perfectly is even less fun than that.

There. I Feel Better.

Very therapeutic. Now I can finish my game in peace.

Also, I was going to write about how every shooter now has you go down one long corridor with no branches (or alternate paths to victory, or variety), but this design trend is contemptible enough to deserve its own post. I just need time for my blood to get more angry.
Posted by Jeff Vogel at 5:10 PM 206 comments: