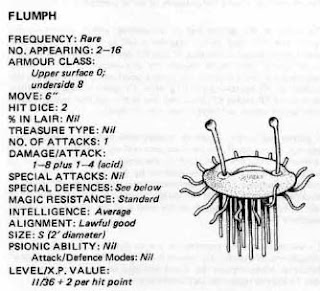 I don't envy them their task. Dungeons & Dragons is one of the great games, and it's had some rough years. Sadly, it's a fair question whether tabletop RPGs will ever be more than a niche of a niche of a niche again, no matter how many times you redesign them. I'll have more to say about this soon.
Posted by Jeff Vogel at 11:53 AM

Email ThisBlogThis!Share to TwitterShare to FacebookShare to Pinterest
Labels: design, dungeons and dragons, flumph, i act like i am smart, whistling past graveyard