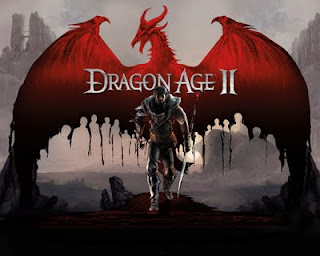 (This article contains mild Dragon Age II spoilers. Such as: There are dragons!)

Since I raved so enthusiastically in this space about Dragon Age: Origins (and Bioware games in general), I suppose I really should say something about Dragon Age II as well. This one is a bit trickier.

It's impossible to discuss Dragon Age II without a bit of criticism, which makes me sad. A lot of skilled people worked really hard over an overly-short period of time to make this game, and I strongly suspect that most of its problems were out of their control, due to directives from above. As somone who writes games myself, I truly sympathize. The inevitable result has been a game that's caused quite a bit of controversy over its quality.

The best place to see this confusion is over on Metacritic. As of this writing, reviewers have given the game an entirely respectable score of 82 (out of 100). Players, on the other hand, have given Dragon Age II a dismal 4.3 out of 10. That is a huge gap!

But it makes a lot of sense. Reviewers have to review the actual game as it exists, not their fantasies about what it might be. Dragon Age II is a flawed but basically competent and enjoyable action-RPG. 82 out of 100 is a B-, and Dragon Age II is a pretty solid B- of a game.

In fact, suppose it didn't have Dragon Age in the title at all. Suppose it was called, say, "Bioware Presents: A Dude Named Hawke Buys a Big House and Has Wacky Adventures." Suppose further that EA had given Bioware the bit of extra time and budget necessary to fix the game's most notable flaws. (Dungeon layouts reused to an egregious extent. A bizarre combat system where reinforcements pop in from out of nowhere. Extreme bugginess, especially in the late game.) If this was the case, I honestly believe the result would be considered a lesser but worthy member of the Bioware canon, something pleasing to pass the time while waiting for Dragon Age II.

But that's not what happened. Dragon Age II is ... well, it has "Dragon Age" in the name. It's the sequel to one of the best-written, epic, envelope-pushing RPGs pretty much ever. I game I truly loved. (If you haven't played it, why are you wasting your time reading this junk? Go get it! Go!) And there's no suger-coating the basic fact of the thing. If you got Dragon Age II expecting something more like Dragon Age: Origins, you are going to face a period of harsh disappointment.

But I'm going to have to defend Dragon Age II here for a bit. There's a lot of really good stuff here, and some of the design choices are really interesting. Other people have dumped on this game enough. Let's take a moment to look at the nice things.

Nobody puts great writing in games like Bioware. Dragon Age II didn't contain as much of that Dragon Age Magic (tm) as I might have hoped for, but it was a beautifully written game. The characters didn't grab me instantly in the way they did in the previous game, but they really grew on me, especially Varric. When my companions talked to each other, I always stopped whatever I was doing to listen.

Considering how crappy most video game writing is, I really think we shouldn't take Bioware for granted!

Also, this game had the most insane, over the top, out of nowhere plot development I've ever seen in an RPG. (Which part? One word ... Mom.) Dang it, it deserves props for that!

I loved the skill trees. The mix of abilities, constant effects, and passive bonuses, combined with being able to decide between getting new abilities and making old ones better, made training very interesting. I retrained my characters several times and found that it was possible to customize my characters for a number of different play styles, which is always good.

The combat did involve a lot of button mashing, but the abilities were varied and dramatic enough that I was rarely bored.

Some Really Good Ideas For Combat

Battles in Dragon Age II are almost always against waves of foes, generally starting easy and getting harder. You need to conserve your powers, using them when they are most needed.

The way the game throws reinforcements into the battlefield deserves some mockery. They are scattered in at random, sometimes literally dropping from the sky before your eyes. If they had entered the fray in a less immersion-breaking way (say, running from deeper in the dungeon), it would have worked better. However, this basic idea of how to structure combat shows a lot of potential, and I hope other games explore it. (Which is my way of saying:  I really should steal that idea.)

His writing is as impenetrable as ever, but Tycho over at Penny Arcade does a great job of breaking down what Dragon Age is really about and how cool it is. These games aren't about fighting Big Fantasy Nasties. Sure, they have fights and monsters, but that is not what they are Capital-A About. They are about politics and power structures and compromises and how actions and decisions can shift history. It's a very cool and ambitious territory to explore, and Bioware has close to a monopoly on it.

Dragon Age II doesn't operate on the same scale as the previous game in any way, and yet it covers much the same ground. It focuses on one city instead of a whole nation and a handful of political squabbles instead of one great crisis, but their hearts are in the same place. And, frankly, this design concept deserves a lot more exploration.

Dragon Age II is a flawed product that is still more interesting than a more polished mediocrity. Starting it is a very jarring experience for anyone with fresh memories of the first classic, but, if you walk away, take a breath, and resolve to meet it partially on its own terms, it's worth the sixty bucks.

A lot of people hate it, but hey, the Internet exists to help people hate things in a purer, more intense fashion. And, hey, if you hate Dragon Age II, that's your right.

But I think it's important for fans to not price themselves out of the market here. Bioware is still making good role-playing games, a genre that has been painfully neglected in the past. It's fun to indulge in a nice hate-frenzy from time to time, but let's try to keep on talking terms with reality here. They're still one of The Good Ones.
Posted by Jeff Vogel at 3:48 PM