Time for another developer journal about the creation of the first game in an all-new series, Avadon: The Black Fortress. The first article was about the unusual way in which I first came up with the idea for the series, and the second article was about the long and dry process of choosing a mood and theme for the game.

Next came the fun part. The game system. The gritty details of the numbers and abilities and treasures and other things that help make role-playing games fun.

Designing a whole new game system is both fun and terrifying. It's a chance to do something new and exciting, but if you have too many changes your fan base will be angry. It's a chance to correct all the mistakes you made over the previous years, and then go and screw up in a whole new bunch of ways. And there are a lot of decisions to make. Lots and lots of decisions, and a lot of time spent balancing each one.

So, before I got too far, I had to make several big choices: 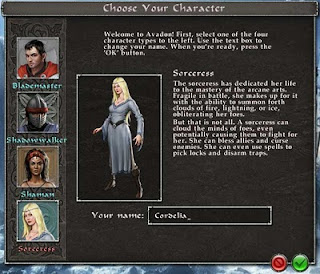 All of Spiderweb's games have had skill-based systems. All characters were able to train in the same pool of skills. Warriors could learn to cast spells. Wizards could learn to use a sword. It's worked very well.

And yet, Avadon will throw all that out the window. Avadon: The Black Fortress will have four character classes, each with entirely different pools of abilities. The classes are Blademaster, Shadowwalker, Shaman, and Sorceress, and each plays very differently.

Your party will have up to three characters. One will be your main character. The other two will be selected from characters in the game, each with their personalities and issues and each of which is one of the four classes.

Three party members. Four classes. Thus, you will always have to do without at least one of the classes. Also, sometimes the characters will be off doing their own business, so you will have to play someone else. Because of this, you will need to shift your tactics occasionally.

So why change? Why throw out a system that's been working great for fifteen years? The answer is: Because I thought it would be fun to write a class-based system.

That's pretty much it. After fifteen years, I need to occasionally try new things to stay interested and keep my brain fresh. Otherwise, burnout, writer's block, and disaster. I've played a lot of good games over the years with class-based systems, I had a lot of fun with them, and I wanted to write my own. And the classes match very well with the different cultures and nations of Lynaeus, so they will be an organic part of the world.

All of our games so far have followed a fairly standard computer RPG way of handling damage. Monsters do tons of damage. You have a tank to sop it up and a healer to heal, heal, heal. We've done this a lot. It's fine. But I think it could be more fun.

Instead, for combat, I've been a bit more inspired by the way Dungeons & Dragons and Dragon Age have handled healing. There is not much of it, and it's almost all from potions. Everyone in your party focuses on doing damage. You and the opponent wear each other down, and the first side to fall loses. There is some healing (from Shaman skills and consumable items) for long, tough fights, but combat is now more about being slowly worn down by many blows.

3. How Often Do You Need To Return To Town?

All of our games so far have required frequent trips back to town to rest. As you cast spells, you spell points fade away. Eventually you run out and need to either use precious potions or go back to rest. This system has its points, mainly because it requires you to conserve your power. But walking back to town to rest isn't that fun.

So in Avadon, you will need to return to town far less often. After battles, your health will return quickly. There are no "mana" or "spell points." Abilities will have cooldowns. When you use an ability, you won't be able to use it again for a certain number of turns.

However, as you use more demanding spells and abilities, your fatigue will slowly increase, and when it gets too high you can't use those abilities. However, fatigue really does increase slowly, and there are items that will revive you. The result: Far fewer trips back to town and more time having fun.

4. How Difficult Will the Game Be?

The opinions of my fans has been nearly unanimous on this point. Spiderweb games have gotten too hard. I am completely revamping game balance with this in mind.

The normal, default difficulty will not be tough. Unless you go picking fights with dragons, Avadon will be far less tough that previous games. At the same time, I will make sure that the higher difficulty levels push back at you.

There Are Some Basic Principles

These are the decisions I made early on, which informed everything that came after them. Next month I'll say more about the game system and the character classes.
Posted by Jeff Vogel at 4:05 PM