(One more vacation journal, and then I'll go back to writing about games for a while. When I'm not making games, I love to travel foreign lands and write snarky and occasionally helpful journals about what I saw. This is the third article about my recent two-week trip through Britain. Some of the content is a little more adult that what I put on this blog. If you are below sixteen or so, you should go here. Anything offensive or misguided should be blamed on the dysfunctional American educational system.)

But if you keep your eyes open and choose carefully, there is a lot of deliciousness, even in pubs. And it makes sense. Britain has excellent meat (most of it grass-fed), great fruits and vegetables, fantastic cheese, and really tasty candy bars. My advice if looking for good food? Look for a place that brags that its ingredients are "locally sourced." That means that at least its heart is in the right place.

Also, we have started each days with the legendary, much feared 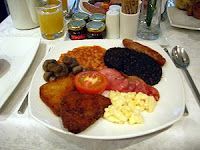 English Breakfasts. It's pretty much the default tourist chow at any B&B you care to name. It's an egg, a sausage link, a piece of bacon, a roasted tomato, tinned beans, toast, OJ, and the caffeine of your choice. And black pudding, if the place is awesome.

It sounds scary, but it's really not. Laid out on the plate, it is, by American standards, a pretty modest meal. Hell, I've picked less food than that out of my teeth and belly folds before I go to bed. But it's a jolt of protein and energy that's perfect for powering you through 12 hours of high-octane touristing. The one day I went without it, I was headachy and miserable by the end of the afternoon. So I am addicted.

Also, speaking of giant jolts of fat. I am very pleased to say that, after vacations being intimidated by the delicate and gazelle-like French, I have to say that the English are of a body build I am ... let's say, more familiar with. As a picked-last-for-sports tubbenheimer from back in the day, I feel very at home here. 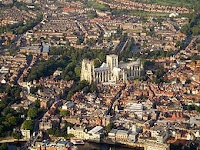 York is, even by British standards, old. It was a major Roman fort and local capitol. They built big walls around it. Then the Normans took it over and made the walls bigger. Then the English came along and made the walls bigger. Most of those walls are still there, albeit with big holes in them. But I met a Scot who knows a guy who knows a guy who can fix those holes for thirty quid.

When you're in York, everywhere you go, you can turn and see ancient walls and parapets and arrowslits and murder holes. So, for a Dungeons & Dragons goober like me from back in the day, being there was like a 36 hour orgasm.

York is very generously laid out for the sore-footed tourist, as just about everything an outsider would want to see is inside the city walls, in one small, easily traversed clump. There is the expected street after street of gorgeous old architecture. Wood buildings that somehow survived from the middle ages. Rows of Victorian townhouses. A working portcullis by the east gate. (Squeee!)

Visiting towns like this, it's easy to imagine that all of the British live like this, in gorgeous, architecturally interesting five story houses. They don't. Actually, a huge chunk of them live in cruddy flats, like we do, sitting on the couch, watching boobies on the lookybox (again, the British word for a "telly") and eating pie.

But then again, looking out the window of the train, I have seen countless developments of row after row of brick houses with heavy tile roofs, each of them built like a brick shithouse, if that brick shithouse was then expanded into a full house. Even their suburbs have great age-envy. Their 20th century houses haven't been around for 500 years, but they look pretty good for lasting the next 500.

Anyway. York. Like Bath, much of the fun was just walking around and gawking. Seeing a six hundred year old building slumping lazily toward the street is always amusing. But the two name-attractions for us were York Minster and the Castle Museum.

York Minster is a gothic cathedral, the largest of its kind in northern Europe. Apparently, there are people out there who get super-excited about cathedrals, but I'm not an aficionado.

York Minster was started in the 13th century and only finished 250 years later (isn't that just like contractors?), full of cool art and medieval stained glass. It's also full of history. For example, it's where Edward the First ("Longshanks" to you, because nicknames were awesome back then) convened parliament to figure out how to kill Mel Gibson before he could impregnate his daughter, or something. I don't know. All the kings and wars and sieges are starting to get a little bit tangled for me. At this point, whenever a tour guide shows me a wall or alley or something, I just say, "Did dudes get killed here?" and he's, like, "Totally!", and I nod and take a picture and we move on. There's a gorgeous shard of ruined abbey wall sticking out of the ground, from when Henry the 18th destroyed it to save Catholocism from the Huns, or something. I'm sure that's what my guide said, but I think the English breakfasts are giving me ham-hallucinations.

If you're going to England, you should know that at no point in the last thousand years has a week gone by without a civil war or beheaded queen or pope-stabbing or Celtic insurrection. Do not, under any circumstances, try to keep any of it straight. If you try to figure out the difference between Henry the Third and Richard the Twelfth and Edward the Umpty-Tumpth, you will go mad, and anyway all that intrigue was made up to sound good for the tourists. Mary, Queen of Scots actually has as much historical reality as the Loch Ness Monster. In reality, from 1000 AD to 1900 AD, Britain was ruled in constant peace and tranquility by a secret circle of elves. So, now that you know that, you can let all the stabbings and dethronings wash over you without letting them worry you too much.

Anyway. York Minster. Almost every day, they have a free Evensong service (a lot of cathedrals do this, by the way), where you can sit in the grandeur and listen to a gorgeous sung service. Now, it's officially church, so you have to be respectful and stand and sit when they tell you to and pretend to pray, but it's very cool and it'll make you feel in touch with the centuries of violent crazy people that came before you, and I highly recommend it.

Oh, and it's free. They don't charge admission for church, which kind of makes sense.

The other stop we truly enjoyed was the Castle Museum. It's in a castle, not about castles. It is a museum dedicated to displaying every detail of life in Victorian and 20th century times. There are displays about housework, and mourning, and the home front in WW2, and the sixties, and so on, complete with antiques and highly detailed recreations of rooms from the times. This sort of thing can be horrible, but the place was completely fascinating.

But the Castle Museum was full of flocks of British schoolchildren, walking in lines in their uniforms and being educated and bored. It was adorable. So that was covered.

One of the big reliefs on the trip has been that, even in very touristy cities, unless you are actually in a museum or other attraction, the vast majority of the people on the street are locals. People live here! I went to a great deal of effort and expense to go somewhere and be a foreigner. I see Americans' fat, slack-jawed faces all the time, thank you very much. When I travel, I want to see the dull, pallid faces of unappealing strangers from all around the globe.

The U.K. currently has a huge problem with alcoholism. This is an actual true fact. However, this does have the happy side-effect that the drunken idiots who paraded shouting past your hotel room at 3 in the morning were probably locals, not ugly Americans. So don't be ashamed!
Posted by Jeff Vogel at 9:41 PM