(When I'm not writing games, I love to travel foreign lands and write snarky and occasionally helpful journals about what I saw. This is one of six articles about my recent two-week trip through Britain. Some of the content is a little more adult that what I put on this blog. If you are below sixteen or so, you should go here. Anything offensive should be blamed on jet lag hallucinations.)

In June, my wife and I went to the United Kingdom for a two week vacation. We did not take our two young daughters with us as we wanted to, you know, have fun.

Whenever we tell people we meet on the road that we left our two girls at home, we get a funny look, a mix of sympathy and harsh judgment. How, they wonder, could anyone leave adorable little moppets at home, when they could be here, costing lots of money and keeping us from ever focusing on anything for one minute without squealing, "We're bored!" in perfect unison. It is a mystery. But I digress.

Though we have visited many foreign lands, going to Britain is a unique pleasure for two reasons. First, my wife and I were exposed to Monty Python and Doctor Who at an impressionable age and are thus lifelong anglophiles. And, second, Britain has not, for the most part, subscribed to the irritating and pernicious affectation of speaking languages other than English.

We are writing these journals as a way of sharing our experiences, to teach the reader something about this mysterious and exotic land. And, of course, to make fun of it.

First off, we're going to Britain. Or the U.K. It is not a vacation in England. That is because we are also going to Scotland, and the Scots can get rather tetchy when you refer to them as English. And then they will punch you, because they are drunk.

We are traveling using the Rick Steves philosophy, as described in his Europe Through the Backdoor series. According to him, we are supposed to strive to have a "backdoor experience" when we travel, where you meet with the locals and bond with them and understand their ways. I don't know why I'm going along with this, as I do not, in fact, like people. I think it's because, try as I might, I just can't stop giggling whenever he says, "backdoor experience."

Anyway. Britain. They drive on the left side of the road there. This scares many tourists into not renting a car, even though the really scary part of this isn't the driving. It is the walking. Already, several times, I have, in my practiced city way, reached a street, looked to the left, saw no cars, stepped into the street, and thought, "Oh. I could have just been killed." Both driving and walking are insanely dangerous. Just hide in your B&B and try to digest your pork-laden British breakfast. It's for the best. 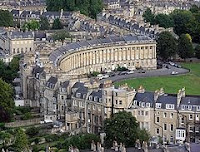 Bath was, in Roman days, a religious and leisure center, and Romans came from miles around to bathe in natural springs there. They went to take baths. Thus, Bath. A literal-minded people, the British are.

Then, in the 1700s, it became the fashionable place to be, and kings and lords, mistresses in tow, came to wear fashionable clothes and take the waters and prance and gad about. About this time, many gorgeous buildings, houses and shops and whatnot, were built. Time went on, but the buildings remain, because if you live in one of the pretty tourist-friendly buildings, you can't change anything inside or outside without official permission.

It's a gorgeous city, really lovely and fun to walk through. And Bath is determined to keep everything beautiful so that five hundred years from now, humans (or radioactive cockroaches) will be able to come here and feast their eyes (or chitonous sense-appendages) upon their beauty. It's a huge tourist destination, and, like Venice, it's lousy with tourists all the time.

The people of Bath seemed to have a real pride in their city and a desire to show it off, which I found really charming. Apart from the ruins of the Roman baths, the main tourist attraction is the free two hour walking tour, where the city gets explained and shown off by an elite cadre of local volunteers. They walk you around, explain the architecture, and get hilariously angry over some plate glass windows that got installed in the 1860s, or a few oak trees that got planted well over two centuries ago.

It's really not like the US, where a 30 year roof is considered a serious investment. Everything there, even new stuff, is built out of huge blocks of stone in the 1700s style, and made to last, like, forever. When I asked the guide about it, he got a little defensive, as if he thought the Yank was going to pick an argument about it, but I totally wasn't. All of the buildings there are held in trust by the residents, and they want the citizens of Bath centuries from now to be able to have the same lovely town/tourist destination. You may buy a house, but you're only borrowing it from posterity. It'll be here long after you're gone. If you paint your 18th century townhouse purple, you aren't just being an idiot now. You're screwing the tourist trade for centuries to come.

But I can't work my head around your town being this eternal thing. When you move in, you're just the next tenant in a long line, and you'll be there in that stone shell until you die and they scrape you out and someone else gets slotted in, and so on forever. Having grown up in a disposable world, it's a really fascinating thing to see, but a place where every single window and fence is older than my entire country is very unnerving.

Several companies offer day or half-day bus trips from Bath to nearby sights. We took one to Stonehenge, because you have to. We dutifully got the audio tour and walked around the big mossy rocks and got sunburnt and there were sheep everywhere and it was very nice.

Nobody knows why Stonehenge was built, but the audio tour helpfully gave a full selection of theories. One of them was, I swear to god, that Satan built it because Merlin asked him to. I feel that even bringing up this nonsense was a violation of the sacred trust between an audio guide and my ear. Look, I don't want to come across as Mr. 21st Century Super-Rational Know-It-All, but, while I don't know who built Stonehenge, I am reasonably confident that it wasn't Satan.

Also, the bus tour showed us many houses that still have actual thatched roofs. This is taking the history preservation thing way too far. Once the roofing material of choice for the seriously poor, thatched roofs are now insanely expensive to maintain. And yet, they do. So pillory me for having a closed mind, but I going to draw the line here at living under a shelter of black, rotting, delightfully flammable straw. 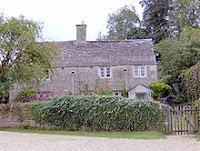 Our bus tour also went to a small village called Lacock, which is being preserved in as close to its original, charming, medieval appearance as possible. They can't have satellite dishes, but the houses all have cable, so they don't have to live like animals. It's very scenic, and lots of TV and movies get filmed there. There's a million old buildings on the isle of Britain, but very few of them ever got to be Harry Potter's house.

I should have appreciated the village more, but I was too busy giggling, in my unendingly juvenile way, over the pronunciation of the town's name. It's Lay-Cock. Heh. Anyway, the town is very pretty, and you should drive there. It's on the A350, between Ballmouth and Oralshire.

The British are completely addicted to tea, but they don't call it tea. They call it "skag." Just say, "I am really desperate for some skag," and everyone will nod knowingly.
Posted by Jeff Vogel at 7:50 PM