I wrote a couple of articles not long ago about how the expected price for Indie games is becoming really cheap. Too cheap to support a thriving, innovative Indie scene. I thought that pricing all games below 10 bucks on Amazon and XNA Community games, sets a dangerous standard and steals the freedom to influence prices that developers need. I got a reasonable amount of abuse for this, because, of course, people hate being told that the things they want are unsustainable.

Which brings us to the new development at Big Fish Games, one of the larger casual games portals ...

Their current pricing scheme, as I understand it, is that you can get any of their games for $6.99. This subscribes you to their service, which charges you that amount per month and gives you another game in return. Of course, you can pay the $6.99, get the game, and immediately unsubscribe from the service, which is what I suspect a number of people do.

So I decided to poke around for a bit and find out how standard this sort of pricing is. At Yahoo games ... 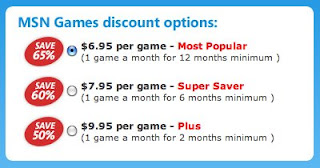 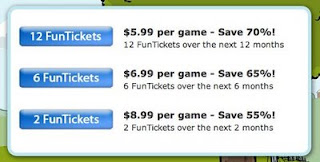 and so on. $6.95 is currently the magic price. Generally, to get that price, you need to buy a subscription. In other words, use the developer's game as a loss leader to win their private route into your credit card.

So let's run some numbers. A typical deal on these portals is that the portal keeps, say, 10% of a sale for expenses and then pays a 40% royalty. (This is pretty close to what I generally get.) Which means each sale of a game on Big Fish would earn you roughly $2.50. You better hope you're earning more per copy elsewhere because otherwise, if you want a pretty meager payout for your work (say, $100K before expenses), you have to sell forty thousand games. You know how hard it is to move that many copies? PRETTY DARN HARD.

Now, this is the point where generally some Internet knucklehead says, "Well, they have the right to do whatever they want." Yeah, of course. And I have the right to point out the gruesome consequences of their exercising that right.

To have a chance of not getting murdered at those prices, you need to sell a monster pile of copies. This is exactly the situation that punishes serving niche markets, taking risks, and doing new things. And those are exactly the roles people are supposedly looking to Indie developers to fill.

I have been arguing that these low prices will result in a desolate and uncreative Indie games space. Look at the offerings at the casual portals, and I think you'll see that I have a point. PopCap provides some cool, innovative games (they're basically the Pixar/Blizzard of casual games), but otherwise the casual portals are a dry expanse of Bejewled/Zuma variants, simple puzzle games, and milking of established properties. Much like in Hollywood, the need to get a blockbuster to survive delivers a harsh blow to creativity.

Of course, it's easy to say, "But they're casual game fans. They don't want anything challenging. Scrabble and hidden object games are the limit for such simple creatures." I personally think that this is nonsense. But the way we're going, we'll never find out.

So What To Do About It?

First, support and encourage portals that don't force developers to sell their work for a pittance. Like Steam, Greenhouse, and MacGameStore.

Second, if you are writing a game of your own, don't let anyone steamroll you into giving your work away. If a portal is going to sell your work for $6.95, make sure you've written a game that can compete in that market. If not, at the very least, don't give them your newest freshest stuff. I'll let them sell an older game for that price for the advertising and exposure, but only after I've already made good money off of it.

What I care about is having a marketplace where a wide variety of Indies can write a wide variety of games and make a living. The casual portals have their place, but, if you aren't prepared for how little they're going to pay you, they're a trap.
Edit: I should have also mentioned Reflexive games, who are also being admirable in pricing Indies at a level where they can actually make money.
Posted by Jeff Vogel at 11:27 PM

Email ThisBlogThis!Share to TwitterShare to FacebookShare to Pinterest
Labels: advice, everyone will hate this, indie, pricing, teh casualz, tldr