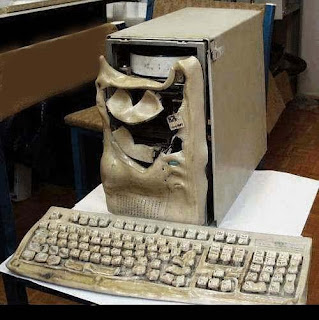 (This is the third of three articles about providing tech support as a small business. The previous chapters are here and here.)

I get two sorts of requests for tech support for my games. First, there's the familiar problems, the things that are my fault or that I know how to fix. I love these. I tell the victims how to get out from under their burden, they get on with their lives (dazed that an actual human read and processed their request for help), and everyone is happy.

And then there are the gremlins. The weird problems. The sorts of issues that are reported by exactly one person out of many thousands. Problems whose cause and fix are a total mystery. These are, alas, most of the problems reported to me. Most of these problems will be caused by incompatible software, hard drive corruptions, wonky graphics cards, or free-floating evil spirit manifestations. Sadly, as the hardware industry seeks out ways to cut corners and make computers ever cheaper, these sorts of afflictions only grow more common.

(Of course, some people say that every problem with a game, ever, is the result of the programmer's sloppiness and error. As if video cards never break and Windows is a flawless piece of software. These people want you to spend limitless time chasing bugs that don't exist. For a sample of this line of thinking, read the comments for my last post. While I acknowledge that some problems end up my fault, wasting energy trying to fix problems you didn't cause and can't fix is a Bad Thing.)

When I get one of these weird problems, I send out a standard list of troubleshooting steps. I have spent years assembling and perfecting it, and it honestly fixes the vast majority of problems. If you are a small developer, I invite you to steal and adapt it. If you are suffering from misbehaving software, I suggest trying these steps. At the risk of sounding slightly arrogant, if everyone would just drop everything, listen to what I have to say, and follow it without question, the world would be a much better place.

1. Restart your machine and try the game again. Run the game when no other applications are running. A lot of glitches and crashes are one-time things and don't happen again.
When someone runs one of my games, it is far from the only moving part in their system. There is the OS. The drivers. The many background processes. The other programs that are running. Any one of these programs might have a bug that messes up sections of memory. (Not to mention the fact that RAM can be corrupted on its own.) The longer a computer runs without a reboot, the more likely that things might get messed up. Then the system goes down and comes back up, and everything is nice and clean again.

Most problems only happen once, due to weird and unreproducible effects, and never happen again. If you get a crash, don't immediately freak out. Take a deep breath, reboot your machine, and try again.


2. Sometimes, game files can become corrupted. Try uninstalling, redownloading and reinstalling the game. This fixes a surprising number of odd problems.
The key step. Any program can become corrupted while being downloaded, installed, or just existing on the hard drive. This step is a surefire way to fix any such flaws. I am constantly amazed by how often I can fix a catastrophic, recurring problem by simply telling the user to uninstall and reinstall. No other mucking about with settings, saved games, or whatever.

This step also has the bonus of making sure the user has the newest version of the software.

One warning note. This step has three parts. Uninstall. Download clean copy. Reinstall. Be sure the user doesn't skip a step, or the beneficial effects are lost. For example, if you install without uninstalling first, the installer might leave the existing (corrupted) files alone instead of copying over them.


3. (Windows Users) Your video card driver files might be out of date or damaged. Get the latest versions of video card drivers and reinstall them. Even if you are currently running the newest version, the files or settings might be corrupted or damaged. Reinstalling might fix the problem.
I always hate telling users to install new drivers, for two reasons. First, they often think that I'm just doing it to blow them off. After all, this is what ALL developers tell them to do. Second, unlike the previous steps, identifying your video card, finding the manufacturer's web site, locating the newest driver, downloading it, and installing it requires a reasonable amount of technical skill. Odds are, your grandmother won't be able to figure out how to reinstall drivers.

Lately, many of my users running 64-bit Windows 7 have had tons of problems that were solved completely by getting the new drivers. Several of them swore up and down that they were using the newest drivers. They weren't.

I strongly believe that the ugly situation with video cards and drivers is one of the key reasons for the huge shift in gaming from PCs to consoles. It's really not good.


4. (Windows users.) If random crashes happen during gameplay, try turning the sound off. If this helps, reinstall your sound card drivers too.
We're getting to the bottom of the barrel now, and this step isn't near as necessary as it used to be. As sound engines have improved, most of my weird crashes from sound card/engine issues faded away.

However, it does eliminate one more set of drivers to work with, and not using sound reduces the amount of memory the game needs. Every once in a while, this fixes a problem.


5. (Windows users.) Sometimes, reinstalling DirectX solves unexplained crashes.
And it does. Very, very rarely. It happens, but seldom enough that I'm considering removing this step from the list. Also, all of our newest games use OpenGL.

If it's a problem or crash nobody has reported before and the user goes through these steps (or claims to have done so) and the issue isn't fixed, I give a refund. I'm out of answers.

I do hang onto the e-mails, though, in case other people pop up with the same problem later on. Sometimes a working program gets bushwhacked by another, poorly-written program. For example, on the Mac side, there was once a version of Quicken Scheduler that caused games to stop being able to see the keyboard. When I got the second report of keyboard failures, I sprung into action. Having the earlier report around helped a lot in figuring out the problem.

There are two steps for fixing mysterious problems that I almost never suggest. I feel that they are very extreme, involving too much work (and perhaps expense) to be worth it just to play my little game.

This is the nuclear bomb, the way to purge your system of all manner of corrupted files. It's also a huge pain in the neck. I generally only suggest this if the user mentions he or she is seeing a lot of nasty problems while using a number of different applications.

Video cards break. Seriously. It's happened to me. Sometimes they fail and you need to get a new one. However, I only recommend looking into this if the user mentions having similar problems over a wide range of games and swears up and down that fresh, up-to-date drivers are installed.

Tech support is necessary, time-consuming, and aggravating. It tests my patience more than anything else I do. And yet, doing it well will, in the long run, make your customers love you and earn you money.

Be as patient and kind as you can possibly manage. Only fight battles when you have a chance of winning. Consider, with humility, that a problem might be caused by a bug. Also remember that, very often, it won't be your fault. Respect how shoddy and cheap and poorly maintained computers frequently are. And, always, try to treat your customers they way you would want to be treated.

You will always be amazed at how messed up things can get. Good luck.
Posted by Jeff Vogel at 12:27 PM