Avadon: The Black Fortress, our next game and the beginning of an all-new series, has been in beta-testing for a while. It's been a grueling process. Testing a new game with a new engine is a lot of work, because basically everything in the game is broken. Happily, we've worked through the worst of it, and Spiderweb Software is still on track to release the game for the Mac in February.

For this developer diary (the others are here, here, and here), I wanted to write about the four character classes in Avadon. What they are, what they are like, and why I made them the way I did. Since this is the very first time I've written a class-based system, I put an awful lot of thought into the classes. I wanted each to have a distinct feel, but I want you to be able to complete the game with any mix of them. 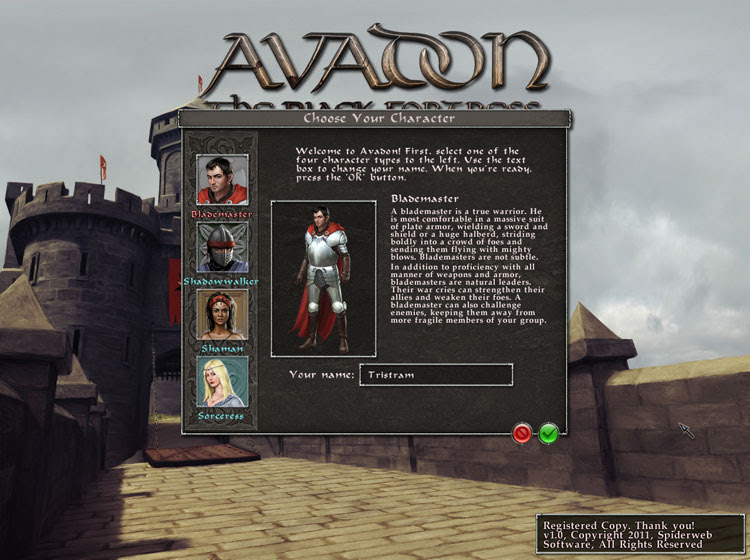 So here they are. I will give the name of each class, the official, in-game description, and what I was thinking when I put it in.


"A blademaster is a true warrior. He is most comfortable in a massive suit of plate armor, wielding a sword and shield or a huge halberd, striding boldly into a crowd of foes and sending them flying with mighty blows. Blademasters are not subtle."

I've tried to stay away from some elements of the standard RPG archetypal class roles: the healer, the crowd control guy, the DPS, etc. But I do like tanks. I like the feeling of having big beefy warriors who stand tall and bear the brunt of the enemy attacks while the other characters stay back and do awesome things. It's not necessary to have a tank in Avadon, but it is a cool option for those who want it.

Blademasters can also stun foes if you get overwhelmed, and they do have the ability to heal themselves. Though they are tanks, I gave them the ability to stun and fling around foes as well to give playing them some variety.


"The shadowwalkers are warriors of the shadows. They count on cunning and evasion, slipping through the guards of their enemies and delivering lethal blows. They can attack with blades, thrown razor disks, and pots of noxious and deadly alchemical substances. And then vanish into thin air."

OK, I'm not going to deny or hide the perfectly obvious. Shadowwalkers are suspiciously similar to ninjas. I wanted a character type that was fragile but could inflict a ton of damage in melee and had all sorts of cool tricks. That narrowed it down to ninjas and pirates, and I though ninjas fit better. This is, in come ways, a real pandering, fan-service sort of move, but it has its reasons.

This is my favorite class because of the cool tricks it can do. My favorite are the abilities that let you teleport and stun enemies with smoke or leave a decoy of yourself behind to trick foes. Introducing teleportation into my games has caused some tricky programming issues to deal with, but it's worth it.

And, to be honest, whenever I need to design something in one of my games, my first instinct is to do the thing I would most enjoy if I was playing. That is a compass that has almost never led me astray. And so, when I had the idea of fitting a ninja-type into the world, I was, like, "Yeah! Cool!" It's neat, and it adds a little bit of silliness to a world that sometimes threatened to be dark and serious.

Also, when I write a game, I try to include some elements that appeal to young, energetic fans. For example, the Geneforge series had a lot of in-depth politics and difficult, wrenching, role-playing choices. However, a lot of people bought the games because they liked the idea of having an army of fire-breathing dinosaurs. Avadon does not have fire-breathing dinosaurs, but it has elements of similar, simple fun.


"The shaman has dedicated her life to nature, and nature, in return, has rewarded her with great power. She can use her connection to the wilds to heal and bless her allies. And, when angered, she can call wind, lightning, and fire to devastate those who challenge her. A shaman is rarely alone. She can call wolves or, eventually, drakes to serve and protect her. Also, she has the unique ability to heal wounded allies."

I wanted a character who could summon pets, and I wanted a character who had a few healing spells. Those two abilities fit very naturally with the shaman idea, especially since I'd already decided that a large swath of the land of Lynaeus was still settled with fierce, tribal barbarians. The shaman is a class that can do a lot of useful things. Produce damage. Make a pet that can bite or hold off foes. Heal and bless allies. Curse foes. They definitely have the most unique flavor of the classes in the game.

It is worth pointing out, once again, that I am leavening the occasional grimness of the setting and seriousness of the drama with a lot of standard fantasy trappings. Ninjas AND barbarians? What? I've always enjoyed writing games that mix the high-minded and the silly.


"The sorceress has dedicated her life to the mastery of the arcane arts. Fragile in battle, she makes up for it with the ability to summon forth clouds of fire, lightning, or ice, obliterating her foes."

Nothing innovative here. It's not an RPG without a cannon, someone who can summon big ol' tornadoes of fire to wipe everyone out. Fragile, unarmored, but able to blast large areas of the battlefield with raw power. Plus, daze or charm foes, give powerful blessings, and so on. Just keep her a safe distance from the monsters.

I don't feel guilty about having some of the classes be very straightforward and what people are used to in RPGs. I want players to have the option to stay with what they are familiar and comfortable with. The fireball-flinging magic user became a fantasy archetype for a reason.

So Those Are the Classes

Your party will usually have three characters: Your main character, and two others selected from the four helpers available to you, one from each class. (And each with his or her own personality, opinions, and goals.) I've tried to make a good mix of familiar and unusual, combat and melee, with a bit of blatant (but fun) fan service thrown in. I still have months of balance work ahead of me to make sure each class is distinct, useful, and fun, but so far, in practice, the system seems to be working very well in practice.

One Final Note On Gender

I have already received complaints because the two melee fighters are male and the two spellcasters are female. Some want female warriors and some want male casters, and they are unhappy. I can understand their irritation.

The sad truth is that this came about due to limited time and resources. Making the art for the four sorts of PCs already consumed a huge amount of time, even just making one gender per class. When we start work on Avadon 2, one of the first things we hope to do is to make female blademasters and shadowwalkers and male shamans and sorceresses. Until then, certain sacrifices had to be made in the hope of a timely release.
Posted by Jeff Vogel at 12:14 PM