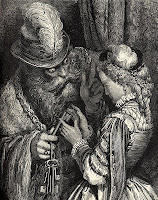 And that is where the new series came from. Over the next few months, I will say more about the world and the gameplay itself.
Posted by Jeff Vogel at 11:46 AM