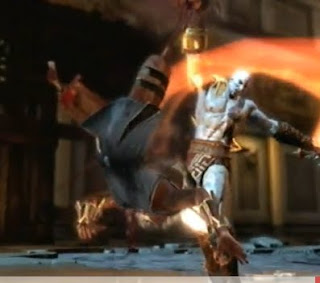 I just finished God of War 3. Having absolutely loved God of War 1 and 2, there was no way I wasn't going to play the next (last?) game in the series. And, since I was playing it while the whole Roger-Ebert-Games-Aren't-Art thing was bouncing around teh Internetz, I couldn't help but view the game through that prism.

First, I have to say that the game is a lot of fun. Nothing beats the God of War series for providing an experience of non-stop, visceral ass-kicking. The game was cool throughout, all killer no filler, and the graphics and production values were predictably gorgeous and expensive.

But what really kept striking me as I was playing it was how it was the perfect example of what I call Anti-Art.

What do I mean by this? Well, I think that something is functioning as art if it connects with you and stimulates your thoughts and feelings in a complex way. And, by complex, I mean summons feeling more complicated than, "Ahhh! I'm scared!" or "Whee! I'm excited!" or "Arrr! I'm angry!" You'll have to meet me halfway on this definition. Better minds than I have been defining Capital-A "Art" for several thousand years. I think the above should give an idea of what I'm trying to get at.

Anyway. I call God of War 3 Anti-Art because not only does it not try to create any such feelings in the player, but it goes to great effort to prevent anyone from feeling anything when playing the game more complex than "Arrrr! Hit! Hit!" The story exists not to engage the player but to alienate him or her (Who am I kidding? Him.), so that nothing distracts from full appreciation for the carnage. If you are the sort of player who cares about story, God of War 3's story is designed to make you ignore it.

And this isn't an accident. I think it is, on some level, the purpose of the design from Step 1.

(Some spoilers for the game are ahead, I suppose, although God of War 3 really can't be spoiled.)

So What Is This Game About, Anyway?

The God of War games are Greek mythology on speed and shrooms. You play this guy named Kratos. He's a Spartan. He wants revenge on the Gods. In particular, he wants to kill Zeus, his father. He wants revenge because ...

OK, you got me. I played the first two God of War games a few years ago, and I can't remember what he wants revenge for. He killed his wife and child in a berserk rage, once, and I think he blames Zeus for it, or something.

The point is that God of War 3 never, in the game or the documentation, says exactly why the main character wants revenge. I think that this little detail is remarkably telling. (It doesn't matter if they made it clear in a game released five years ago. This stuff has to be repeated in The Now.) Revenge plots can be very emotionally compelling. They really connect. People tend to have an innate sense of justice, and a desire to see a wrong righted is a really easy way to suck someone in. But ONLY if we know the crime that is being avenged!

Without that, what the game gives us is a character who staggers around, bellowing his desire for revenge. I swear, every cutscene goes, "Hi, Kratos!" "I want revenge! Hack hack hack!" "Urgh. (Die.)" And, without purpose, we are only enacting the mind-boggling violence in the game purely for its own sake.

And, oh Lord, the violence. You press in the joysticks to simulate gouging a character's eyes out with your thumbs. You saw a god's legs off (plenty of blood and bone shards jutting from stumps) for his boots. You rip out a titan's stomach and he holds his intestines in his hands. You snap Hera's neck for, as for as I can tell, no reason at all. The result of your destruction of the Gods is unbelievable death and destruction on the world's surface. These actions are interspersed with the hoarse gruntings of what must be one of the simplest and most unlikeable protagonists in gaming history.

So if you are, like me, a story-guy, what you have is someone doing unbelievably horrible things for entirely nebulous reasons. What, apart from the action, is there for my mind to grab hold of? The parts of the game, like story and character, that normally contain the "art parts" are so shriveled and gross that you can't get anything out of them. Leaving the cool hacky parts.

Kratos is a horrible person wreaking unbelievable havoc, and you are controlling him. You are the one doing all these things. This alone is enough to alienate anyone halfway sane. It certainly prevented me from lowering my psychic boundaries and ever identifying with any character in the story, even for a moment.

"How Dare You Say What I Do or Don't Relate To?"

Of course, just because I can't relate to the game doesn't mean other people won't. Fair enough. But I will express one unfounded opinion.

Kratos is nothing but a pure expression of self-hatred and mindless, sociopathic violence. I know there are people out there who can really relate to that. But if you are really into that and can go, "Yeah, that's totally me!" I might humbly suggest that spending a lot of hours feeding and reinforcing that might not be entirely healthy. Just sayin'.

So at the end of the game, you've killed most of the Gods. You have had to rescue Pandora from a labyrinth, so that she can open her magic box and give you a weapon to kill Zeus. Your desire to save Pandora to atone for killing your daughter is a plot point. This might have been a good fig leaf for the sociopathy, but then Kratos sacrifices her to kill Zeus and she dies. So, that.

Then, after a huge, epic (really fun, don't forget the gameplay is really fun) boss fight with Zeus, your foe almost dies but gets up again and you get sent into this gorgeous, super-trippy sequence where you explore this dark black outerworld and relive everything you've been through and then you meet the ghosts of your wife and child and they hug you and there's some tender words about forgiveness. Then you find Pandora's Box and open it yourself and learn that the weapon you need to kill Zeus is Hope. You had the power inside you all along. Also, Love is the Fifth Element.

So I'm playing this, and it's really cool, and I'm thinking, "Sure. It's a little late, but there's a little humanity here. Something I can sort of accept. Maybe this isn't going to be all horrible and ..."

Psych! Sucker! Then you leave the dream world and kill Zeus by smashing his face against a rock, bones cracking, blood spraying all over the camera, in a sequence as visceral and unpleasant a bit of violence as ...

So What's Your Point?

I have to state again, I had a lot of fun playing God of War 3. It was really cool, once I figured out to, emotionally, hold it at a great distance. Nobody does this sort of gameplay better. And, while I wasn't thrilled with the violence, and I wouldn't let my daughter play the game until she was nine or so, I'm not immediately against it. I'm no anti-game zealot, and I never will be.

The fascinating thing about the experience, for me, was that the ugliness was so sustained, so pure and undiluted. A lot of people worked on God of War 3, smart people. They must have realized, at some point during the years working on the game, what they were making, and the effect it was likely to have on people.

When people consider games as an art form, they tend to ask three questions: Are They Art? How Should That Art Affect People? Will They Only Affect People in the Old Ways, or Are Their New Untapped Ways For People to Connect With Video Games?

They should also realize that not everyone welcomes the idea of a game as an artistic statement. It is, in fact, possible to purge art from your game, to attempt to intentionally repel players from everything but the sporting aspects. Maybe Art is stupid. It wasn't something I expected. In some cases, it might even be a good idea. But, I confess, I tend to hope for more.
Posted by Jeff Vogel at 1:39 PM

Email ThisBlogThis!Share to TwitterShare to FacebookShare to Pinterest
Labels: flamebait, i act like i am smart, i hate art, ranting, that guy, think of the children