The Last, Best Article On How to Fix the Olympics! 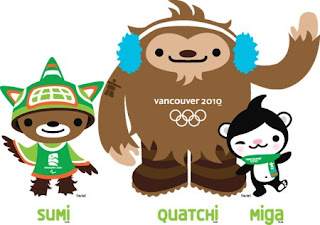 I don't just spend my time writing games. I have interests. I have passions. And that is why, every two years, I plop my well-rounded self onto to couch for several weeks to watch an abusive amount of the Olympics.

And we're serious about it in this household. We were dumb enough to renew our Tivo subscription for the Winter Olympics, just so we wouldn't have to sit through commercials like animals.

Of course, those who feel that they are oh so superior to any mere sporting event have totally tuned me out by now. Good. They don't deserve the Olympics. Sure, the event is expensive, commercialized, and occasionally full of corruption, stupidity, and incredibly tight-assed officials. But there is an awesomeness there that the bad parts simply can't obscure.

However, speaking as a game designer, the Winter Olympics could really, really use some tightening up. There are countless ways to make the events more interesting for the people who count. That is, us. At home. But I'm not going to suggest, as some have, dropping sports. That is cowardly and Unamerican. Also, if some young, strapping lad has spent his short life wrecking his body to be best at something that is almost surgically absent of interest, I'm not going to be the one to tell him that his sport sucks beyond redemption. Even if it does.

So here, offered free and out of my pure love for humanity, are my ways to make the Winter Olympics much more cool and watchable. I'm not the first to make up such a list, but I plan to be the last.

Downhill Skiing, Speed Skating, Slalom - Here's a rule. Any sport where you can't tell with the naked eye who is winning is dumb. These events are always decided by a margin of three squintillionths of a second, periods of time too small for the human brain to process them, and only magic, time-telling robots can tell us who won. And maybe the robots are lying. Because robots hate us.

My game designer powers tell me that this is an easy fix. Just add a factor that will cause a greater variance in the finish times for the athletes. A polar bear randomly wandering halfway down the course should solve the problem. And, for extra exciteness, put a ribbon on the bear's tail. Pull it off on the way down and we shave five seconds off your time.

Ski Cross, Snowboard Cross, Short Track Skating, Any Four-Person Roller Derby On Ice - These are how downhill skiing and speed skating should be done. Fast races. You can see who won. Awesome crashes.

And in Short Track Skating, on average, 90% of the skaters are disqualified. Anyone can win! Heck, I just got a Bronze for the men's thousand meter, and I never left my house!

Anything With Ski Jumping That Doesn't Involve Lots of Nifty Flipping In an XTREME Manner - These are the most tedious sports to watch that don't have the word "luge" somewhere in the name. Every jump looks exactly the same. Also, these sports are harder to fix, as the slope doesn't really have a good place to put the polar bear. The only way to fix this is to change the rules and equipment to make ski jumping exactly identical, in every way, to snowboard halfpipe and hope that nobody notices.

Any Event With a Snowboard - Thank God for XTREME sports for keeping the Olympics watchable. Enjoy it while it lasts. Give it a decade or two and the Olympics-fun-sucking-machine will have its way with them. Remember, a snowboarder got booted from the Olympic village for getting photographed displaying his bronze medal in an (ahem) erotically suggestive way. The fun window is closing fast, folks.

Hockey - Basically soccer on ice. Which means it's boring. The best way to fix it is to force the players to play 60 minutes straight. No rests. No interruptions. Watching their desperate efforts to flail the puck into the net around the 50 minute mark will be awesome. Also, the profound fatigue will make it much harder for them to keep away from the polar bear.

Figure Skating - The perfect sport for the Winter Olympics. No sense of fun or spontaneity. Comically corrupt judging for us all to argue about. And sparkles, sparkles, sparkles! Plenty of excitement, but not the sort that is ever, you know, exciting. Perfect viewing for those of us with cardiac issues.

There's still room for some minor changes. First, no skaters under eighteen. I want to be able to watch some contestant pull out her sultry Salome dance without feeling like my name should be on a list somewhere.

Second, three nights isn't near enough for Ice Dancing. We need a minimum of eight nights to fully appreciate the splendor of whatever the hell that is. Oh, and finally, the entire current pool of judges could perhaps be removed and replaced with ANYONE AT ALL.

Bobsled - In my brave future world, everyone in the bobsled will be forced to switch places halfway down.

Curling - There is a general progression that goes on with curling. People hear about it and go, "They do what? What brooms? That sounds dumb!" And then they sit down to watch it for a few minutes, hoping for a good laugh. And then they say something like, "Wow! How lame! They're just playing shuffleboard with brooms. And they ... Ooh. That was a nice shot. And the shouting and the snacks and they're all middle aged. This is so dumb. And ... Sweet. Completely knocked their rock out of there. ... Where was I? This isn't a sport. This ... This ... ... ... SWEEP HARDER, BITCHES!!!"

Curling is the ultimate sport of the Winter Olympics. It moves relatively quickly, compared to, say, hockey. A lot of points get scored. There is strategy. You can tell who is winning with the naked eye. And there is an eccentric, low-tech charm to the thing, an "I could do that" air (even though you really can't) that makes it far more approachable than watching wiry, teenage pixies jumping eighty feet into the air.

So to fix curling? Show more of it. Especially the woman. A lot of them are totally hot in a kind of naughty librarian sort of way.

Oh, and One More Thing - The best way to fix the Olympics is to get rid of the tight-assed, suffocating self-importance of the Olympics. After the Canadian hockey-women won their gold medals, they took to the ice and drank champagne and smoked cigars. Look at the pictures. They are awesome! And so some officials got angry and made them apologize. Hey, we aren't talking someone performing an act of love on a bronze medal here. It's celebrating your hard-earned victory by cracking a cold one on the back of a Zamboni.

The Olympics is about (i) insanely dedicated young people (ii) doing crazy things (iii) for our enjoyment and then going off to have (iv) mind-bogglingly athletic sex. Anything that does not directly contribute to one of those four key factors must be destroyed without mercy. Preferably before 2012, when the next Real Olympics will happen.
Posted by Jeff Vogel at 11:28 AM