What? Some Indie Games Made Money?

I think the XBox LIVE Indie Games project is really cool and exciting. For the first time, random losers like me can write a game and sell it on consoles. This really excites me, because my games are far too small and niche and low-budget to have a chance of getting on, say, XBox Live or WiiWare.

Sure, there are problems with the service. It has predictably taken a bit of time for the quality to come up. And I think you should be allowed to charge more than $10 for a game. But this is still a darn cool opportunity for small developers, and Microsoft should be applauded for it.

But that leaves a big question: Can any developers actually make money on the darn thing? Well, we now actually have some hard numbers for earnings of the top games. Take a look. They are very interesting. 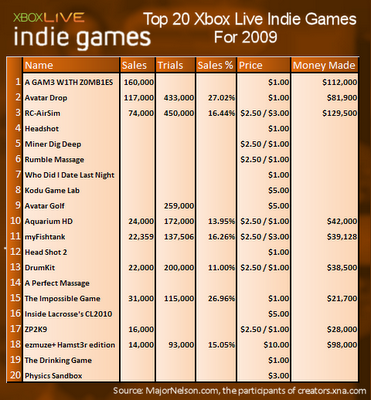 The top two games for numbers of sales are I MAED A GAM3 W1TH ZOMBIES 1N IT!!!1 and Avatar Drop. And, coincidentally, they're the two games on the service I've actually bought. I MAED A GAM3 is the best dollar I've ever spent on gaming. (Just narrowly edging out CrushCrushCrush on Rock Band.)

Excellent party games, and you should buy them.

2. Don't undercharge for your work!

But look at the profits column. Two of the three most popular games had developers who wisely chose not to charge a paltry dollar for their labors. Though the amusingly named "ezmuze+ Hamst3r edition" is down at #18 in number of sales, its higher price helped it to make a pile. The $2.50 games are making more than the $1 games, because that price increase (from almost nothing to almost nothing) isn't causing sales to drop by 60%.

I MAED A GAM3, to make a lot of money at a dollar price, had to get a LOT of exposure. Most developers won't get that lucky. You can luck into a quick payout, but you can't build a lasting business (meaning making a living off of multiple titles over a period of years) making dollar games. I've said it before, and I'll say it again. Don't race to the bottom! Figure out a fair price for your work, and stand by it.

3. The kids love the vibrators.

I hate it when people act like Indie developers have some obligation to be always super-creative and artsy and like Jesus or something. I know some people are miffed by the popularity of the "massage" games, two of which are on the top twenty. But freedom to do whatever you want will result in a lot of ... Well, try out The Drinking Game, and you'll see what I mean.

I personally think that the "massage" games are pretty innovative. They saw demand for something nobody else was doing, and they made it. That is what innovation is. Which teaches a valuable lesson. Even when you get the innovation you want, it will still probably suck.
Posted by Jeff Vogel at 12:08 AM