Announced ... Avernum: Escape From the Pit

This blog has been sadly neglected lately, due to a combination of vacations and a frenzied effort to get our newest game to a point where we could officially announce it. But that day has arrived. Drop by our web site and take a look at Avernum: Escape From the Pit!

This is the second time that we have rewritten the Exile/Avernum trilogy, a move that is full of all sorts of questionable integrity. I am very nervous about announcing this title for exactly that reason, even though we have very, VERY good reasons to do a serious, polished rewrite of this game. Because Avernum has such a large and passionate fanbase, we have already put up an Avernum: Escape From the Pit FAQ to answer many of the questions that will be coming up. Such as, Why?

Longer answer. Look at this screenshot from Avernum: 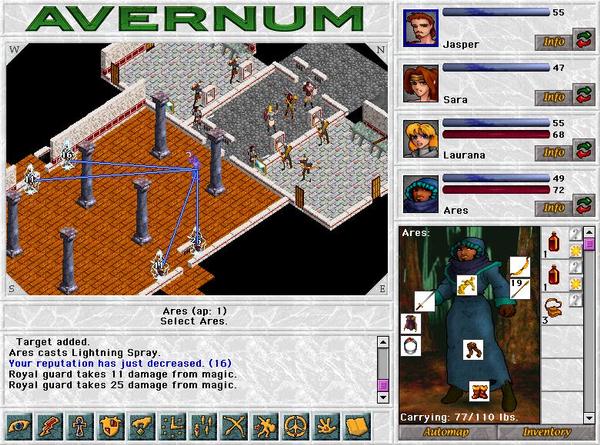 We've been very determined not to half-ass this adaptation, and, when all is said and done, we will have put almost as much time into it as into a whole new game. It's been a little rough, and yet, I don't see how I had a choice. The first Avernum trilogy is my first creation and still one of my most beloved, and if we didn't rewrite it then it would have just disappeared. I can't abide that.

Other terrifying decisions. For the first time ever, we will be selling a new title for $20. When we released our first game, wayyyy back in 1995, we charged $25. At the time, that was a fair and unsurprising price for a shareware game. These days, the constant downward pressure on prices can no longer be ignored. Also, the market is developing in ways that finally make me think that we can make more money at lower prices.

I now hope to return to a sensible and semi-regular blogging schedule. For example, soon I will write a sort of review of LA Noire. Before I can write it, I want to see if the game ever has a murder victim that isn't naked.
Posted by Jeff Vogel at 11:43 PM

Email ThisBlogThis!Share to TwitterShare to FacebookShare to Pinterest
Labels: avernum, back in the day, omigodomigodomigod, shameless self-promotion, spiderweb software